This captivating trip of 10 days of Morocco Imperial Cities and desert tour is a great introduction to our unique country, it takes you through four old cities which are Fes, Marrakech, Rabat and Meknes allowing you to get a taste of Morocco’s art and history. Besides, you’ll get the opportunity to do camel trekking in SAHARA desert that one shouldn’t miss in life. There are gorgeous places to visit, architectural sights to see and incredible experiences await you on our tours. We are able to offer you unbeatable prices and unparalleled value.

On your first day in Rabat, you’ll be transported to your hotel/raid for having dinner and spending the night.

After enjoying a traditional breakfast, we’ll start visiting all the Moroccan capital monuments; starting with the crenellated walls of red ocher with a total length of 5 km built under the ruling of sultan Yacoub El-Mansour, then see the kasbah of Oudaya which is dated in the 12th century followed by a visit to the Tower of Hassan II that each of its walls is decorated differently. After that, you’ll take a look at the typical Moroccan architecture and furniture of the mausoleum of Mohammed V and go later to the new town to visit the Royal Palace which was the official residence of King Mohamed VI. After having a great time while touring, we’ll head to the economic capital of the country, Casablanca. Dinner and overnight stay at the Hotel.

On the third day, after breakfast, you will take a quick tour of the financial capital “Casablanca” where you’ll admire the Square of the United Nations, the Boulevard Mohamed V, the Anfa, the corniche and the famous Great Mosque Hassan II. After having Lunch at the restaurant, we will head to Marrakech in order to continue your Morocco Imperial Cities tour. Dinner and overnight at the Hotel.

You’ll explore Marrakech, the pink city, by visiting the gorgeous Koutoubia square and mosque crowned with copper globes, walking around the crowded streets, admire the crown jewel of Moorish architecture and the largest theological college in Northern Africa, the Medrassa ben Yousef, and falling in love with the lavish rooms and lush gardens in the Bahia Palace. In the afternoon, you’ll get the chance to visit jemaa El Fna square, a local gathering of musicians, story tellers, snake charmers and entertainers with performing monkeys and you’ll interact also with the locals who are known for their sense of humor. Overnight stay with a gourmet dinner in hotel.

After breakfast, we will depart from Marrakech and make our way to the Kasbah of Ait Ben haddou passing through the the Tizi ‘n’ Tichka (at 2260m above sea level) via the High Atlas Mountains. On the way, we will visit a local Argan oil cooperative of a group of Berber women then explore the UNESCO world Heritage site, Ait Ben haddou, which is the biggest Kasbah in Morocco. Afterwards, we will take a lunch break, go to Hollywood of Africa Ouarzazate then cross the road of 1000 Kasbahs to reach Kalaat Mgouna. Our final destination for the day will be Dades gorge where you’ll have Dinner and spend the night in Hotel.

In Dades Valley, you’ll visit the spectacular rock formations which are known as the monkey’s toes then we’ll head to Tinghir and Todra valley to enjoy the superb view of the Berber villages filled with clay houses that are dispersed in the valley. After exploring the red cliff, a favored spot for rock climbers, we’ll proceed to Erfoud and Rissani where you’ll enjoy lunch. Then, our journey will continue to Merzouga where you’ll ride camels into the Dunes to watch the sunset and reach our nomadic camp for dinner and an overnight stay in SAHARA desert.

You will wake up early to enjoy the sunrise that makes the whole Morocco Imperial Cities and Desert Tour worthwhile, have breakfast and take a quick shower in riad before crossing the rocky pathways of Ziz Gorges and the Tizi Ntalghamt pass to Ifrane. Along the way, we will stop in Zaida where you will taste a delicious barbeque with a cup of mint tea and in the Berber village of Azrou to visit the cedar forest where some attractive monkeys live in. Thereafter, we’ll spend some quality time in Ifrane before making our way to Fes to spend the night in hotel there.

The imperial city of Fez is considered as the country’s first political, cultural and religious Capital of Morocco. To expand your horizons, you’ll visit the Royal palace then reach the highest point of the city to observe the ancient medina from above which is a panoramic view, explore the mosques, visit the madrassas and meet the artisans who were taught in Spain and have maintained the Andalusian style prosperous in Fez for many years giving the city the title of “city of the artisans”. Our trusted guide/ driver will empower you with all necessary information. Hotel with dinner and overnight stay.

Our driver will transport you to Chefchaouen, “the true jewel of Morocco”, which is a city of characteristic design with white washed walls, blue doors and tile covered roofs, it is known for its basket weaving and pottery art work. You’ll love its open terrace cafes, see the grand Tarik-Ben-Ziad mosque with a distinctive Minaret inspired by Torre de Oro in Seville, explore the Kasbah and the Andalusian gardens and Visit the crenellated towers. You’ll be welcomed by the locals who are ready to tell you anything you want about the oil mills and craftsmen shops that are dispersed around the city. Lastly before returning back to fez, you’ll shop around the bustling souks for a taste of everyday local culture.

After breakfast, we will transport you to the airport according to your flight schedule hoping that we have given you the best Moroccan experience tour ever. 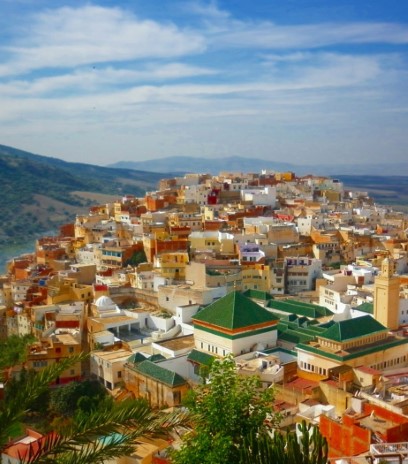 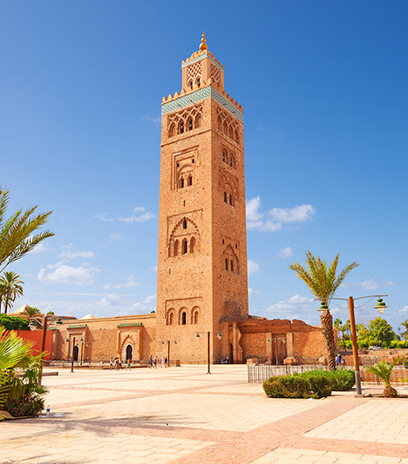 TO CONFIRM YOUR TOUR